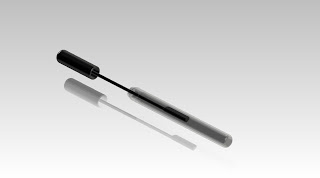 2012–When last we met and flashbacked I was telling you that we had our first ever prototype in our eager little hands and had surveyed various people to see what they thought. Thankfully, they all thought it was a great idea and that it worked well. So, it was time to chat again with Vince (the design guy) to discuss what the actual Wand was going to look like. The best friend and I had always been clear about our “brand.” We knew we wanted sleek, chic, and high gloss. We wanted the Wand and its packaging to look expensive, without actually being expensive. We communicated this to Vince and Julie and they got it right away. Julie was/is in charge of the packaging and Vince was in charge of the Wand design itself. Wait until I show you his first ever rendition of the Wand. It looks EXACTLY the same as it does right now. He “got” it. So, in addition to knowing how we wanted it to look, he also needed to make sure he had a grasp on what materials would work well. Any of my make-up folks out there know that the entire inspiration for this invention was the inept applicators that come with the products. We needed to think outside of the box when designing this tool to determine how to make it more effective than what was out there. Meaning, clearly we had to make the Wand longer than the current applicator (so it would reach the bottom) but we also had to make the Wand thinner in diameter, so it could maneuver in those small tubes well. If we made it as thick as current applicators then it could not flex as well and would not be able to reach the tops of those tubes. That was very important because we wanted to make sure the consumer would be able to FINALLY clear the illusive bottom of the tube, but also the tops and upper sides, where there was always product left. And left over product = wasted money. So, Vince had all of his ideas and plans and stepped away to work his magic (pun intended). 🙂 When he returned, with his presentation, let me tell you, I could have cried. I mean, this idea popped in my head…Ms. 9 to 5 chick, who could barely draw a stick figure. I, of all people, had thought of something that required some ingenuity and now, after sharing this vision, someone had turned it into something REAL.  It was a feeling I can’t describe and quite frankly that feeling has stuck with me–the amazement and downright shock that this came to my life. Want to see a picture of the first Wand design?

So, the logo was in place, the brand solidified, the Wand design complete, experts firmly on the payroll and we were beyond ready to move full steam ahead. The best friend and I were in constant talks about next steps and now manufacturers. I’ll stop there because the manufacturer piece is a HUGE one and talk about a learning curve! Wow!

Right now we are focusing on Marketing and building the brand. We are spreading the word through social media and through actual word of mouth. We have a meeting set with our business advisors in a few days to discuss the results of the website analysis (want to ensure it’s doing all it can and is user friendly) and to continue to craft a marketing strategy. We are busy bees.

As always, thanks for reading…